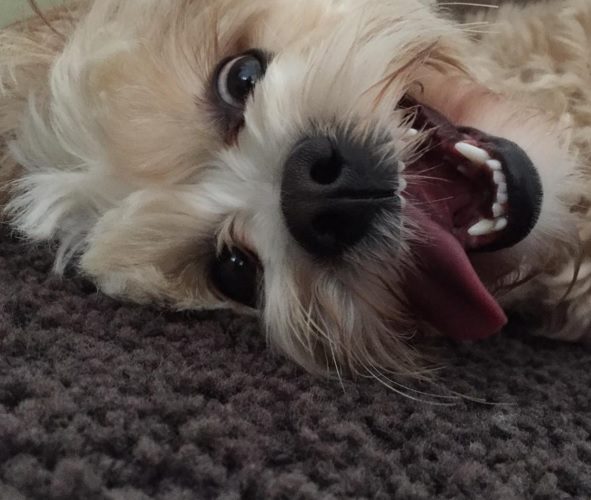 In June last year one of my close friends, Zoe, told me that her dog had passed away, his name was Tiger.

Tiger was very important to Zoe and her family and as you could imagine, they were devastated. Zoe’s mum is the biggest animal lover you could ever imagine, in fact, my mum often says that when she dies she hopes she comes back as one of Zoe’s mums pets! The family finally decided to get another pet, not to replace Tiger but to fill the big hole in their hearts that he had left behind. Tigers death was so sudden and tragic that it made me feel so sad for her and her family, I was sad for weeks.

School holidays came and I was home with my dad,  it had been a cold rainy day and when mum came home she suggested that we went to the RSPCA to see all of the dogs (I was looking for a puppy as my Birthday present). We went out there and saw only a couple of dogs because most of them had recently died from parvo. It was closing time and we were just about to leave when a lady brought out what looked like a ball of fluff. As she came closer a head popped up and turned out to be a puppy. We asked her what kind of breed it was and she told us that it is a male caramel cavoodle (but turned out to be a champagne moodle). I wanted him so much but because it was closing time they told me we had to wait until the morning to do the paperwork. The next day we went out to the RSPCA and waited for them to open the gates, as soon as they did we parked and went straight into the office. We told them that we wanted the moodle and we were taken out to him. He was this wet frazzled little thing and he shook like a leaf but for me it was love at first sight. We paid for him but had to leave him there for a few minutes so we could make a quick trip to Petbarn to buy him some supplies (mum reckons we bought half the shop).  On our way home from the RSPCA he started coughing and sneezing we looked at him and noticed that he had mucus  stuck to the hair around his nose. I panicked because we thought he had  parvo, mum took him to the vet and thankfully they said he that all he had was kennel cough which was easily treated.  We named him Jed, Zoe and her family named their dog Bear and we celebrate their birthdays on the same day because to us, they are brothers.  Jed and Bear are now 1 year and 5 months old and they think they own the place… sad thing is- they do!