Guinea Pigs are rodents and unlike their name are not part of the pig family nor do they come from Guinea.  Research suggests that they do not exist naturally in the wild and in fact originated in the Andes and have been a household pet in the West since the 16th Century. 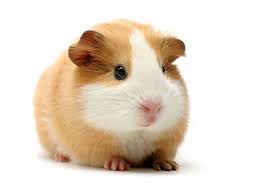 They have a docile nature and respond to handling and feeding and are quite easy to care for.  If handled early in life they seldom bite or scratch.

Guinea Pigs are much better when kept in groups of 2 or more and are generally housed in cages lined with wood shavings or similar.  They are messy in their cages with both the male and females, after the cage is cleaned, urinating an dragging their lower body across the floor of the cage to mark their territory.

They generally don’t do well when housed with other species. 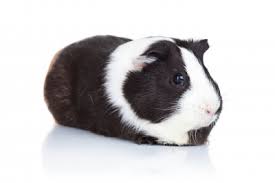 Guinea Pigs are not particularly agile and are poor climbers.  They startle easily and when startled in groups will stampede.  They are good swimmers, however, their eyesight is not particularly good although they do have about a 340º angle of vision and a well-developed sense of hearing, smell and touch.

The guinea pig is able to breed all year with as many as 5 litters per year.  Their gestation period can range from 59-72 days with the average being 65 days and with average litter size of 3. The pups are born well-developed with hair, teeth, claws and partial eyesight unlike many other rodents.   Guinea pig females frequently share the nurturing role where a female may adopt the pup of another.

Males reach sexual maturity at 3-5 weeks, however females can be fertile as early as four weeks of age and can carry litters prior to becoming adults.

Guinea Pigs thrive on a diet of fresh grass hay in addition to food pellets.  Alfalfa is a popular food choice.  Like rats and mice, their teeth grow constantly and they routinely gnaw to prevent their teeth becoming too large for their mouths.  A number of plants are poisonous to them including any plant which grows from a bulb, ivy and oak tree leaves.

Guinea Pigs are very sensitive to heat with a constant ambient temperature over 32ºC sometimes causing death.  They respond poorly to wind, drafts and extremes of humidity outside the range if 30-70%.

Rabbits are great indoor pets but are not low-maintenance pets.  They are social, adorable and have a ton of personality, however, a bored bunny can get into a lot of mischief!

If you get allergies to hay or some grasses, then a rabbit is not for you.

Rabbits live to over ten years of age, so are a long term commitment.  They do not re-locate or travel well.

What rabbits can and can’t eat by “hoofia”